Patchwork in Paris, plus ribbons and trims.

If you are a crafter/ home sewer in Paris, you must pay a visit to the area at the base of Sacre Coeur in Montmartre. It's full of wonderful places to buy fabrics and craft materials. The one I visited is Moline Mercerie on 6 rue Livingston. It is a complete treasure trove for anyone who likes crafting with fabrics, ribbons, etc and I wanted to buy one of each!  It is located near Montmartre and not difficult to get to.  Take the Metro to Anvers.  Come out of the station at the exit that says Sacre Coeur, Funicular and cross the road.  Turn right and browse your way past all the fabric shops, turning left on Rue Seveste. Follow this up to where it joins St Pierre (two blocks) and turn right.  There you will find two Molines, nearly opposite each other.  Head for Molines Mercerie. It is by far the best one.

There is another mecca for crafters called La Drogerie. It is located in the area of Les Halles at 9 - 11 Rue du Jour.  I did not get there on this trip, although I have been to one in Nantes. It is superb, offering wools for knitting, buttons and trims and hundreds of projects to inspire you.  If you google it, you will see what I mean. As if Paris isn't wonderful enough, it has all this too!
Posted by Annabellouise at 04:01 1 comment:

Where to Find Fabric Shops in Paris

We had four wonderful days in Paris last week.  It was meant to be three, but due to a meltdown by Eurostar on Thursday, our stay was extended for a day.  Yippee. That meant another delicious meal in a neighbourhood cafe/bistro near our hotel and a morning coffee among the Parisiens on Bouldevard de Courcelles.
However, the highlight of the trip for me was a trip to Montmartre to find the mecca for people who love sewing. To get there, you must take the Metro to Anvers.  Go out of the station where the sign says Funicular, Sacre Couer. Cross the road, turn right and then left on the Rue Sevestre. There are fabric shops everywhere, but the best of the lot is Tissus Reine, located at 3 - 5 Place St Pierre, which runs at a right angle to Rue Sevestre.  You can't miss it.  It's large. There are bolts of fabric outside (special offers) and inside there are three floors.  The ground floor has dressmaking fabrics.  Patterns, haberdashery/notions and furnishing fabrics are upstairs. Nothing is cheap, ( There are lots of places with cheap fabric nearby.) but everything is very good quality and there is a lot to choose from.

The Fashion and Textile Museum in London


A friend and I spent a very happy morning viewing Artist Textiles, Picasso to Warhol at the Fashion and Textile Museum on Bermndsey Street in London.
It does not seem to be a well-known museum, but it is certainly worth a visit.  The last exhibition I saw there was Belleville Sassoon and before that, Kaffe Fassett.  Both were glorious, but this was exceptionally wonderful because, of course, I love textiles. If you fancy going, take the tube or train to London Bridge Station (south of the river Thames) and turn right into Tooley Street and then right again into Bermondsey Street.  Keep walking until you see it on the left hand side.  It can't be missed, as it is painted in very vibrant colours. This part of Bermondsey has been 'gentrified' and it is full of little boutiques and cafes.  On a sunny day, it's a good place to go just to look around. This exhibition runs until 17 May 2014. 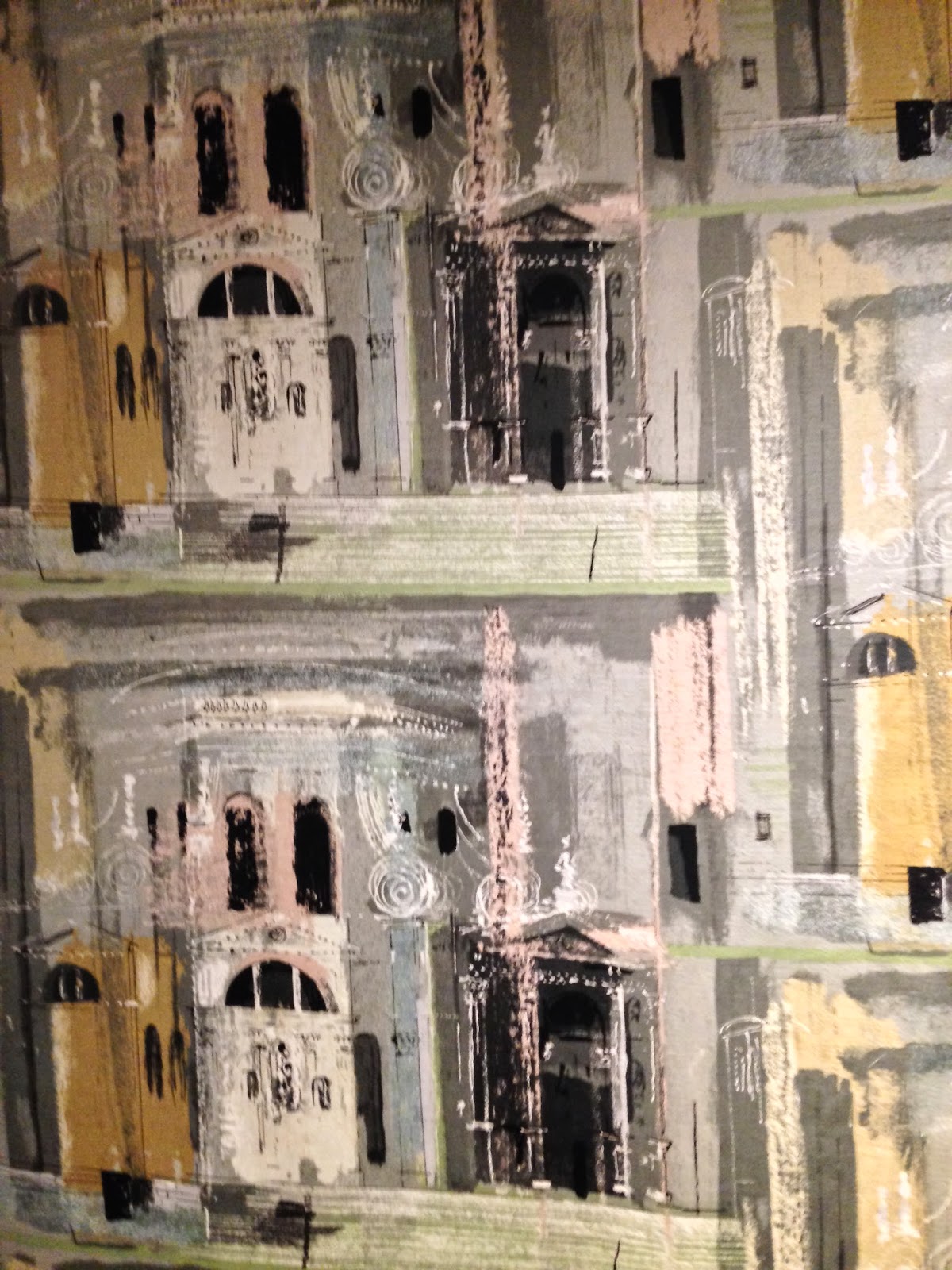 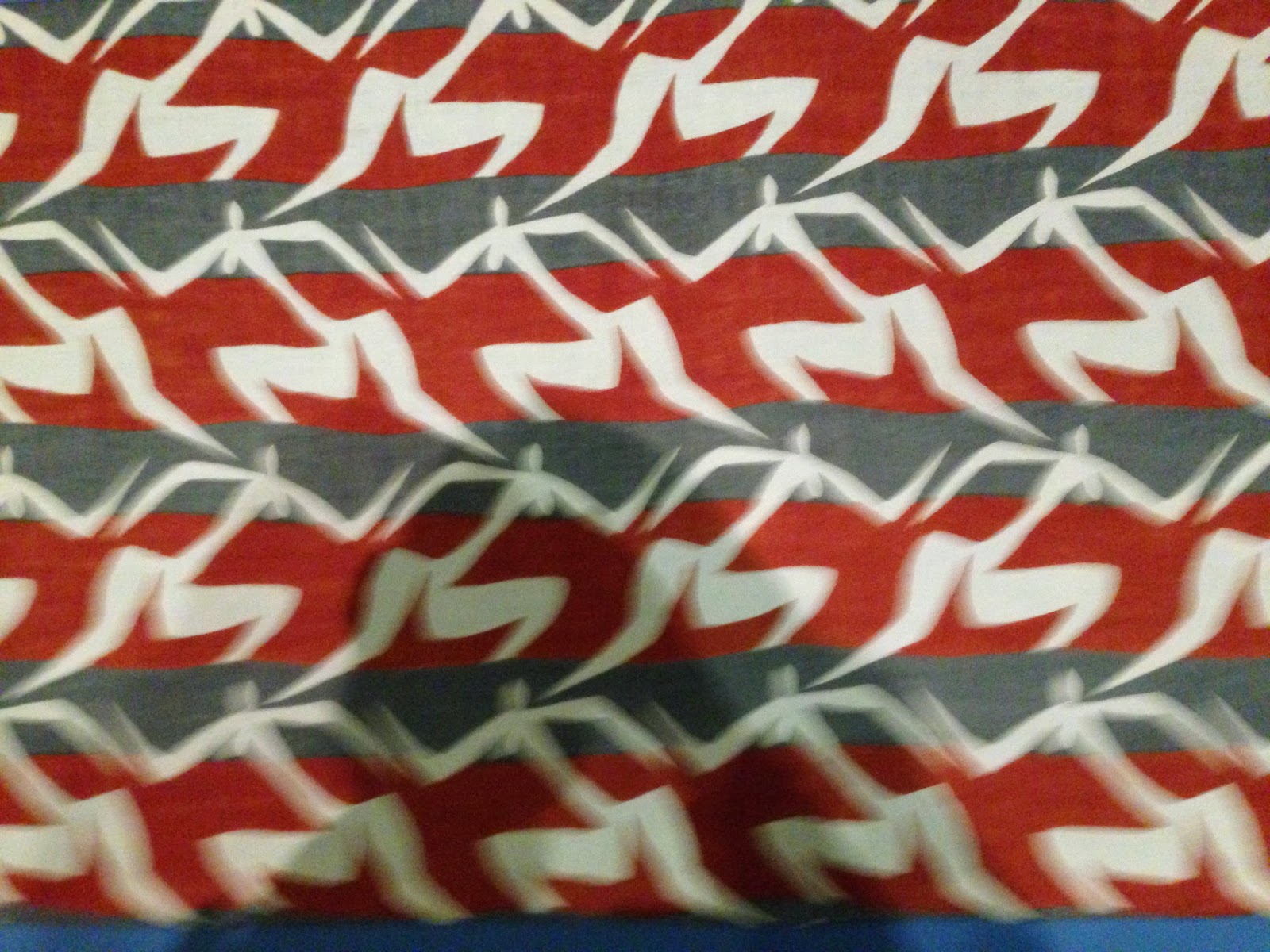 Posted by Annabellouise at 08:12 No comments:

Last week I bought a bag of red peppers thinking I might do roasted vegetables or make peperonata. Then I found a package of minced beef in the freezer and decided to make stuffed peppers.  These were one of my favourite meals childhood meals. My mother always made them with green peppers, stuffed them with rice and minced beef and topped them with a tomato sauce. However, Hubby does not care for green peppers, so it had been awhile since I made them. He enjoys red peppers so I decided to turn the recipe on its head and stuff them with rice and use the mince to make a goulash sauce.  The peppers would be outside the goulash, but would still impart their flavour.  It was a bit of lateral thinking that paid off.

Method:
Cook the rice and put to one side.
Slice the lids off the peppers and stand them upright in an oven-proof container.
Brown the mince.
Add the onions and garlic and soften for 5 minutes.
Add the tomatoes, paprika, salt and pepper.
Simmer for 30 minutes.
Put in pre-heated oven (180C/350 F), cover  and cook for 35 minutes.
Serve one pepper per person. 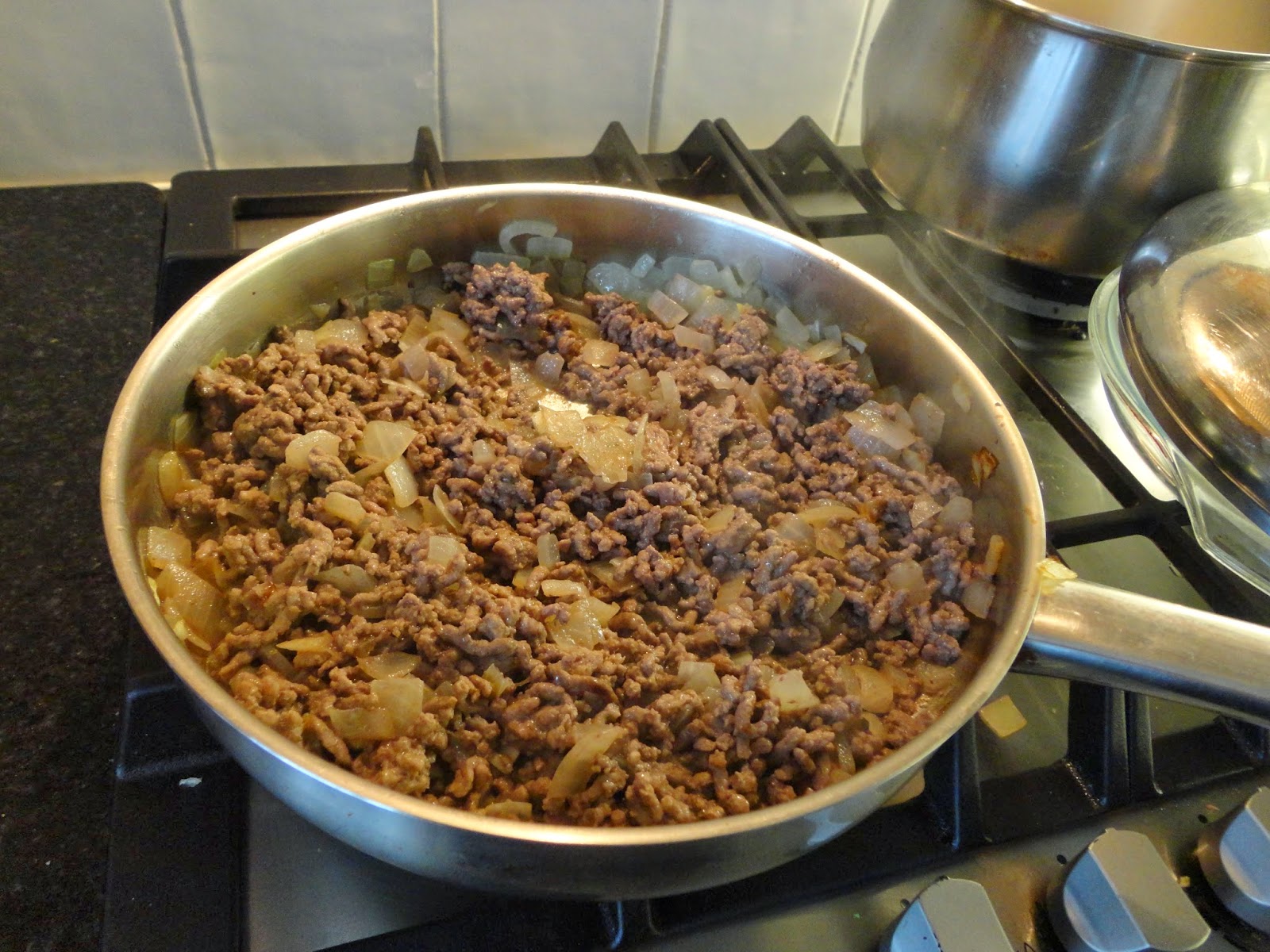 Brown the mince, add onions and garlic and cook until they are softened. 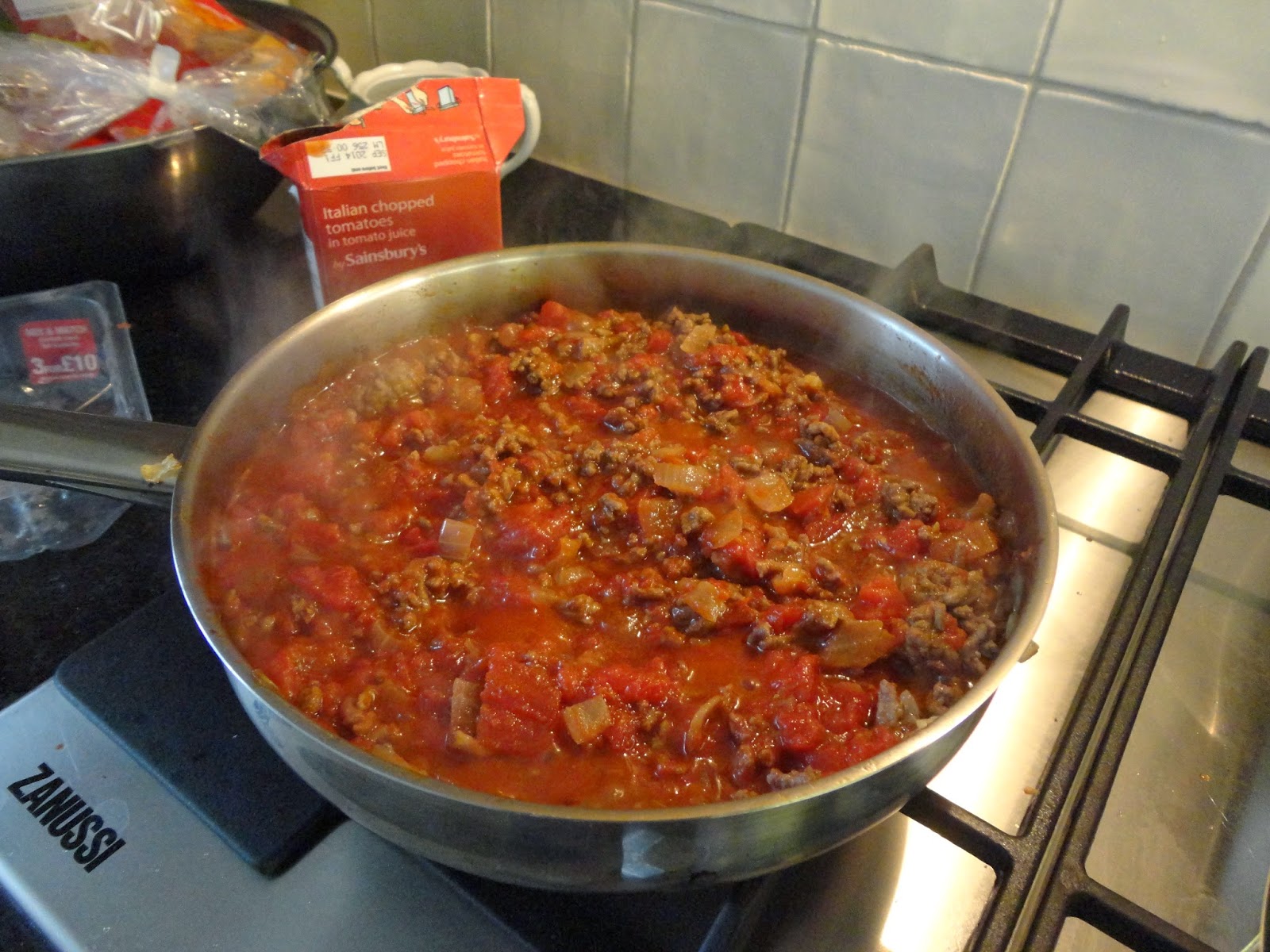 Add the tomatoes, paprika, salt and pepper, then cover and simmer for 30 minutes or more. 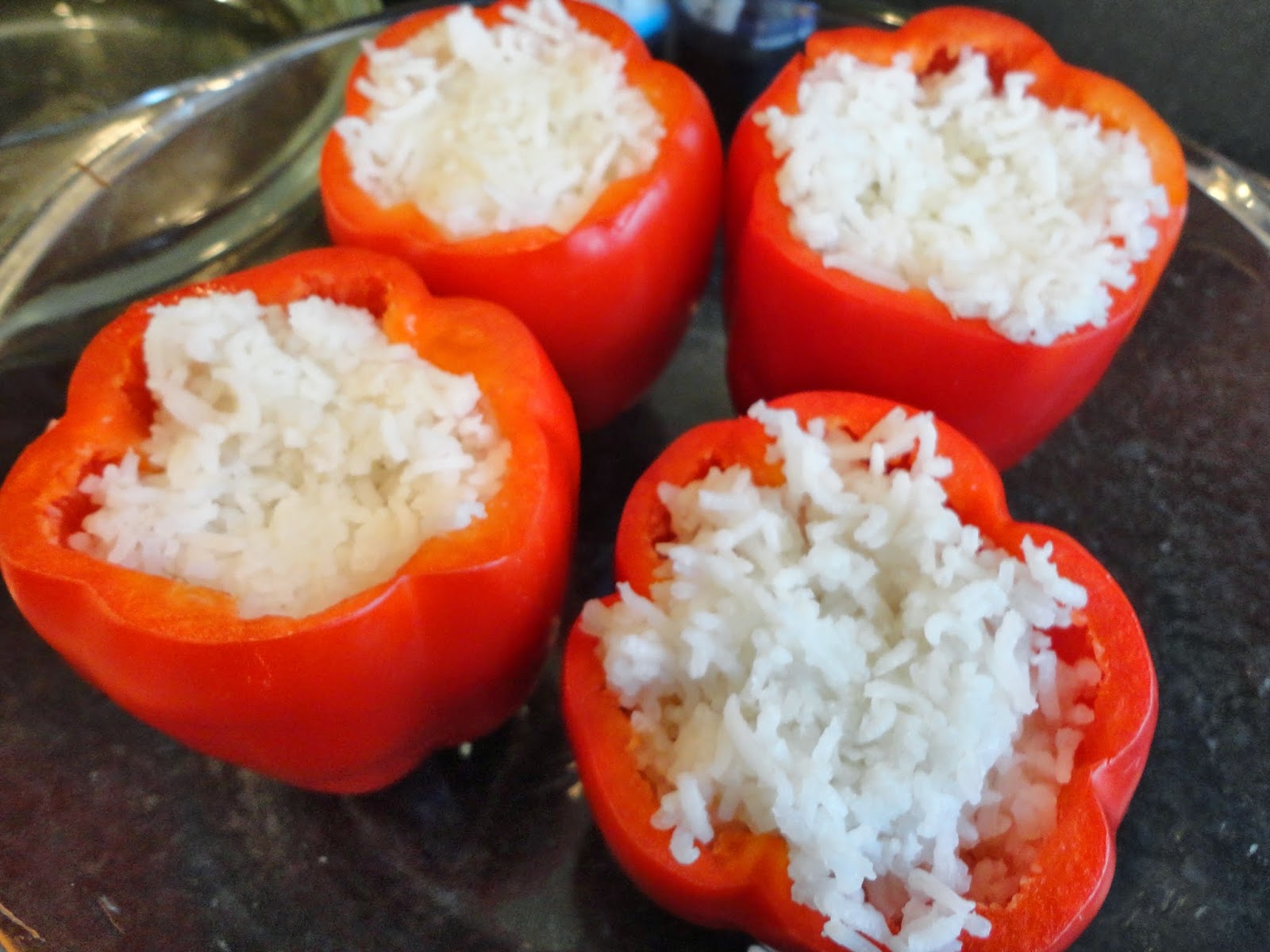 Fill the peppers with the cooked rice. 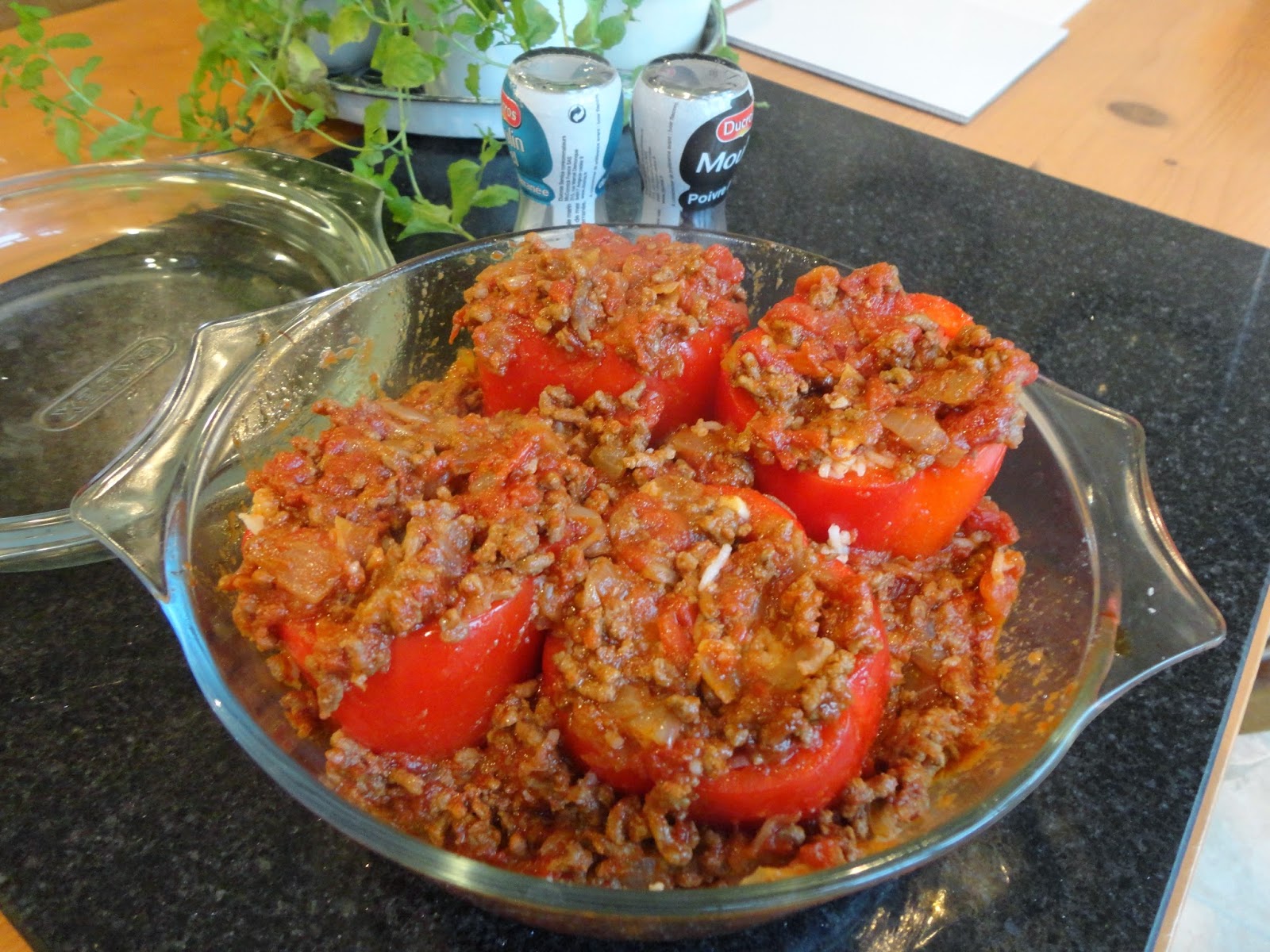 Top each pepper with a dollop of the sauce and then put the rest of the sauce around the peppers.
Cook, covered, for 35 minutes in a pre-heated oven at 180 C/ 350 F. 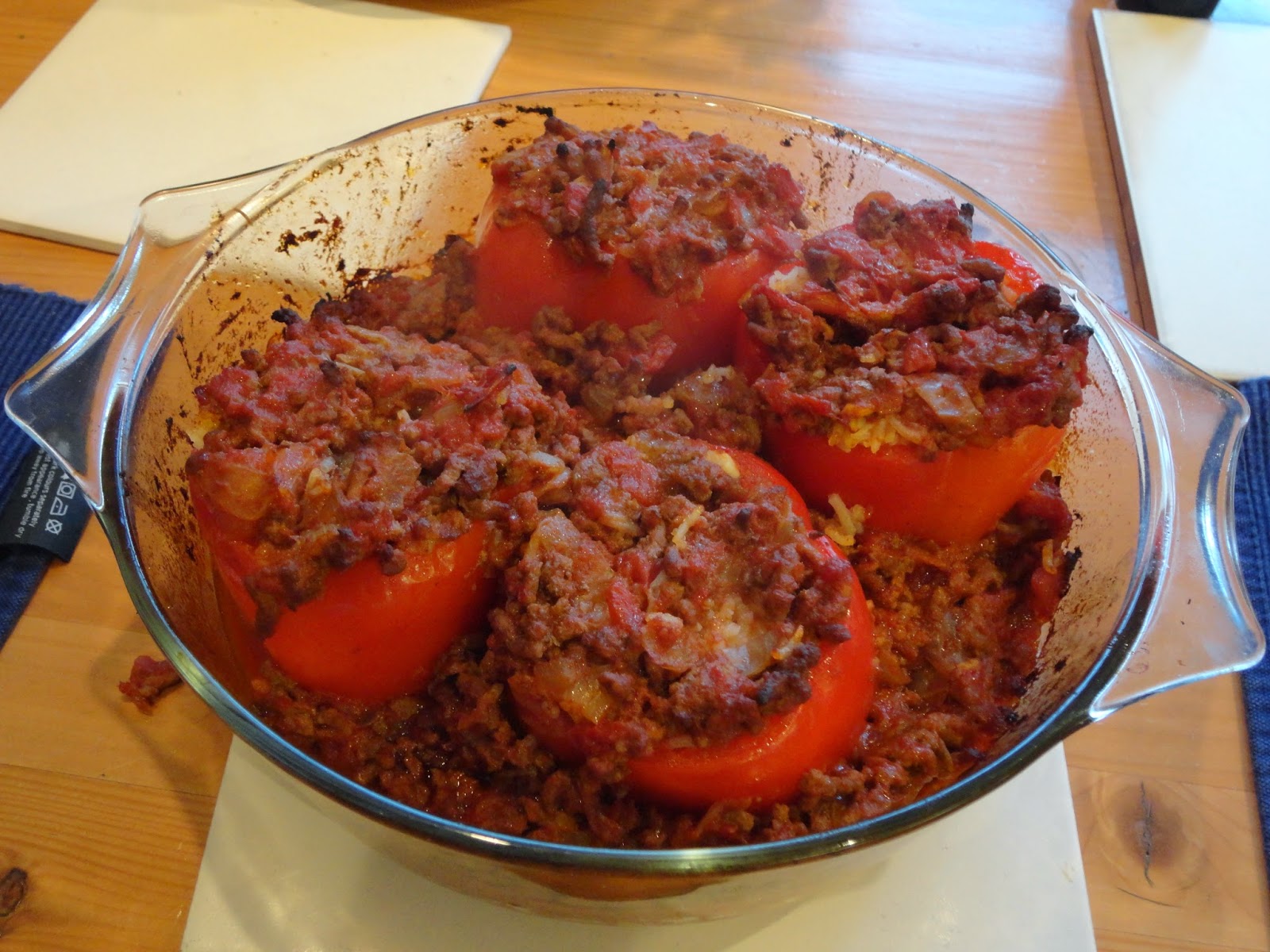 Remove from the oven and serve.  Serves 4. 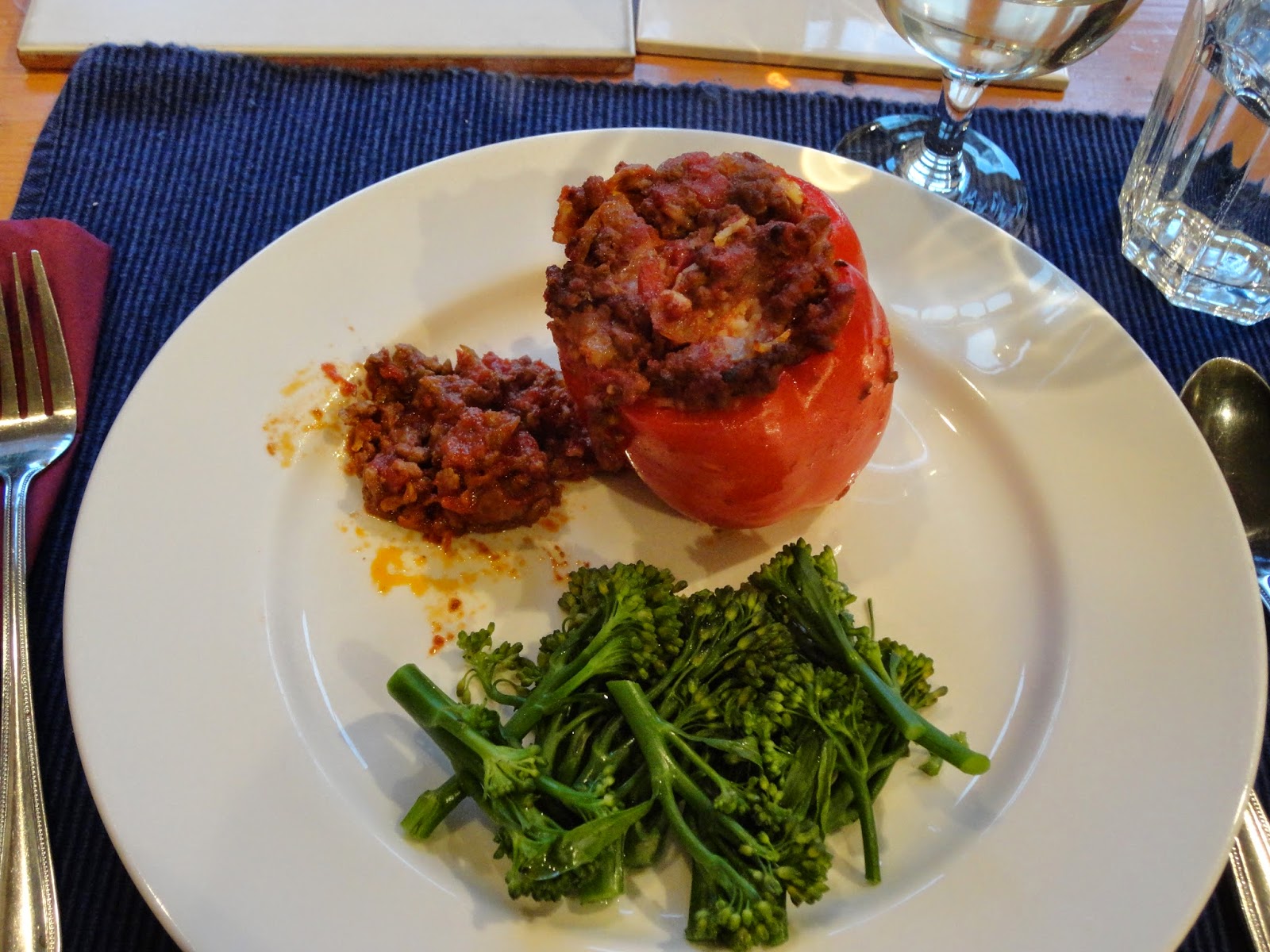 Bon appetite.
Posted by Annabellouise at 11:30 No comments:

Annabellouise
Annabellouise is older than she cares to admit, is married and has two grown up children. She lives in London. She loves fabrics and has them stashed under the beds, in cupboards, in the attic and generally spilling out around the house, waiting to be made into something wonderful.